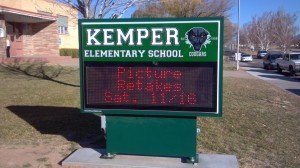 Kemper Elementary School in Cortez, Colorado now gets to show off its new marquee sign. A sign may seem like a simple thing but for Kemper Elementary, it was a bigger project than you might think. The school had never had a sign before, but they really wanted something that would show their school pride.

Unfortunately, the school’s budget, as so many schools are, was just too tight to go right out and purchase a new sign. However, that did not stop Kemper Elementary from stepping up and working towards their goal. They soon partnered with S’Cool Services Fundraising to help raise the money needed for the new sign.

Kemper Elementary hoped to raise around $5,000 of the $8,000 needed for the new sign during the first fundraiser. With the help of S’Cool Services Fundraising and some very motivated kids, parents, teachers, and school staff, they raised $11,725, more than enough to cover the cost of the new sign plus set a little extra aside for the next project.

School administrators were very excited about the unexpected success and are now even more motivated to do more fundraisers next year, with S’Cool Services help, of course.

Tell Us Where to Send Your FREE Samples